In 2009, the first Unitologists form an alliance with Gentek. after observing Alex Mercer's superior strength and abilities, the Unitologists want humanity to be strong and united with help of the Blacklight virus. After weeks of tracking and bring down Mercer, the two groups put him in stasis. 200 years later, Alex Mercer is sent to Tau Volantis for study. Around the same time, the discovery of necromorphs and more markers grabs much attention, thus the Blacklight project is long forgotten. The Unitologists storage necromorph specimens on Tau Volantis as well but things get out of hand. The necromorphs run free on the planet. Alex Mercer remains in stasis until the year of 2511. He is awoken by Ellie Langford, Isaac Clarke, and Jon Carver. Will the four put an end to the necromorph apocalypse? 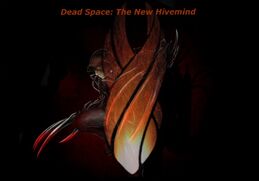 Add a photo to this gallery

Chapter 3: Tau Volantis and the Forgotten

Chapter 4: The Engineer, the Pilot, and the Solider

Chapter 5: The Man Out of Time

Chapter 7: One Body, One Mind

Chapter 8: No Time to Grieve

Chapter 9: The Marker and its Companion

Manhattan, New York... A city of possibilities. A city of colors, crowds, and corruption. He could see it all, the lives of every person. The good and evil acts of humanity in memories and experiences. A tall hooded man was perched on the Empire State Building like a hawk searching for its prey. His black leather jacket with white strips on the sleeves and two red dragons on his back made him a recognizable target. But that's never an issue because one of the man's greatest gifts was to shape shift his form into any person. Camouflage and mimicry; the best way to infiltrate any force. The man also had the ability to shape shift his hands into deadly weapons such as blades, claws, hammer fists, whip fist, tendrils, and a shield for defense.

The man only had one objective; revenge. He was driven by it, wanted to murder the people who were responsible for the way he was.

"Gentek and Blackwatch... Throw everything you got at me, I'll only grow stronger."

He gritted his teeth as he stood up and jumped off the edge. He spread his arms and legs in a free fall fashion as he glided back down to the streets. In a way, gliding over the city calmed his troubled mind, relieving him as long as the moment could last. His enemy rolled down streets in tanks and jeeps, searching for him.

"What the fuck, are they preparing for a bloody war or something?" he thought.

An old water tower came into view as he got closer to the ground. He landed on it, slid down the top and landed on the roof a building.

"back off you bastards! I'm not infected!" A young woman shouted against two Blackwatch soldiers.

"You kiss your mother with those lips?" The two soldiers laughed as they got even closer to her.

Just as they were about to grab her, a hooded figure jumped in between the woman and the men.

"Run." He murmured to her before his hands extended and sharpened into claws.

"Open fire! Open fire! It's Mercer!" One shouted but it was too late.

Bullets were useless as they struck the man but he kept charging forward. The woman saw nothing but a flash of black and red. The men screamed in pain as sharp claws sliced through their stomachs. The woman couldn't move, her eyes couldn't leave the tall hooded figure as tentacles slid from his body and wrapped around the corpses and consumed them. She cringed and gagged at the scene but her body refused to move. The man turned to her and cocked his head curiosity, eventually walking over until he was literally looking down at her. All she saw was a nose, lips and a chin. The rest of his features were hidden under the light brown hood.

"Who are you? Or rather... What are you?" she asked nervously, in the presence of a killer.

He tilted his head a little, his strong icy blue eyes striking into hers. She felt even more uncomfortable, those were the eyes of a predator, an animal, something not human.

"I'm Alex Mercer... I'm the reason for all of this. They call me a monster, a killer, a terrorist. I'm all of these things." 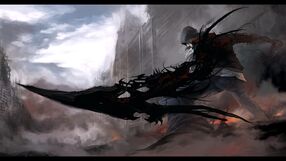 The Prototype
Add a photo to this gallery

The mighty Prototype jumped across streets, buildings, even high ways with extreme speed. Little did he know he was being recorded. The men sitting in the conference room could believe their eyes. They watched the footage again and again, examining Zeus' movement and strength.

" This... This will bring humanity together... Stronger and as one body." Said a very slim man as he stood in front of the large screen displaying Alex Mercer. Gentek scientists looked at each other in confusion.

"What?! Zeus is a living weapon! Are you out of your mind?" They all blurted out at once. The presenter hushed them all and continued.

"We know what he is... We just want to use him. With his DNA, we can change the face of man! Don't you see? Alex Mercer is the next step in human evolution!"

A sudden silence fell in the conference room. Worried eyes wondered around faces for something to say. If this mad man's plan involves capturing Zeus and finally containing him, it was a risk willing to take. With a nervous nod to each other, their agreement was certain. "Alright, gentlemen. Let's get to work."

The slim man walked out of the conference room without another word, removing his glasses as he stepped into the elevator. He removed his jacket and pressed the button to level one in the elevator. Soon his ear piece blasted with static and a loud voice, causing him to cup his ear in pain and shock. "Robert, is the meeting over? Are they settling with us?"

"Yes, yes! I have the Gentek scientist on board with us. Soon, Alex Mercer will be ours." He replied rudely.

"Good. We are closer to unity, Robert. I can feel it. Now, we have to capture this extraordinary specimen. Altman be praised, brother."

"Altman be praised." Robert stepped out of the elevator and smirked as he saw news reports blasting on tv screens. Alex Mercer just took down a squadron of helicopters. 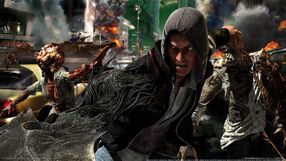 The next step for Humanity
Add a photo to this gallery
Retrieved from "https://deadspacefanon.fandom.com/wiki/User_blog:DS2117/Dead_Space:_The_New_Hivemind?oldid=6110"
Community content is available under CC-BY-SA unless otherwise noted.